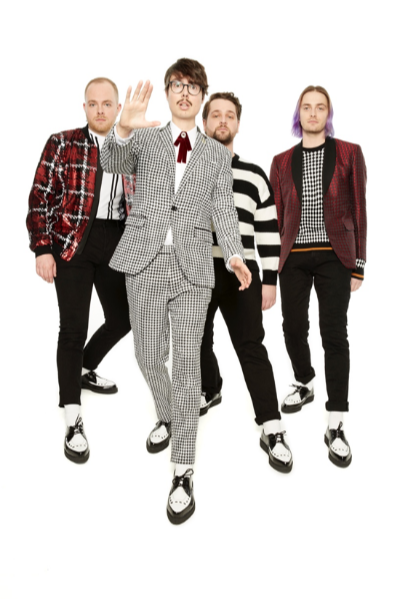 US visionaries Joywave have shared the video for their new single ‘Half Your Age’ following the announcement of their upcoming third album, “Possession”, which will be released on March 13th and their confirmed return to the UK as support to PVRIS on their tour next month.

Directed by Isaac Rentz, Joywave have created a pitch-perfect parody of a big-pharma commercial, while sublimely addressing the theme of misplaced resilience at work within the track. The clip follows the story of a despondent character who is subjected to some of life’s difficulties and is convinced to take the so-called miracle solution ‘Brushitall’, a tongue-in-cheek product invented by the group, derived from the chorus’ lyrics.

Vocalist Daniel Armbruster spoke to The Fader about the concept, explaining, “We were obsessed with the idea of creating the worst, most literal, tasteless commercial sync for the song possible. We bounced back and forth between a prescription medication ad and a toothpaste spot. Big pharma won out”.

As the video progresses, obsession takes over signalling his loss of control. This idea highlights the overall connotation of “Possession”, linking together it’s 12 tracks to reveal the album’s core messages.

Each track speaks to the noise surrounding us. “Our heads are spinning. Every day is crazier than the last. Every screen we walk by is shouting at us, demanding our undivided attention. Control over our own lives is constantly under siege”, notes Armbruster.

Possession explores these themes at both a societal and personal level, ultimately encouraging listeners to zoom out and see the big picture. It was recorded and produced at the band’s studio in Rochester, NY, by Armbruster and mixed by Dan Grech-Marguerat (The Killers, Liam Gallagher, Lana Del Rey).

Continuing with the band’s creative use of noteworthy samples and field recordings, “Possession” is woven together with audio from Voyager’s Golden Record (launched by NASA in 1977). Curated by Dr Carl Sagan and affixed to the front of Voyager 1 and Voyager 2, the disc was designed to convey a basic understanding of humanity to intelligent lifeforms in far corners of the universe and was also the inspiration for the album artwork.

‘Half Your Age’ is the latest in a series of new music released by the band over the past 6 months. All tracks were accompanied by equally imaginative videos, ranging from the emotionally charged ‘Like A Kennedy’ to the wildly creative montage of fictitious movie title cards for ‘Obsession’ and the visually playful Claymation video for ‘Blank Slate’, all streaming now via the band’s official YouTube channel.

At the end of 2019 Joywave returned to the UK for their first headline show in several years, playing to a sold-out crowd at London’s The Lexington as part of their series of intimate live performances aptly titled “The Possession Sessions”. They also joined Bastille on a major North American run, adding to their already impressive live resumé, which includes the likes of The Killers, Young the Giant, Cold War Kids, Walk the Moon, Bleachers, Metric, Sir Sly, Bishop Briggs, Thirty Seconds To Mars, and next month PVRIS.

The UK dates include Glasgow, Manchester and a show at London’s Brixton Electric on February 20th before heading out to Europe. The band will then embark on two US headline tours in support of the album throughout March, April and May.

Joywave’s unique outlook and inventive interpretation of pop demonstrate a band that is at the top of their game. Their intelligent artistry and undeniably addictive music draw them out from the crowds with the upcoming album “Possession” set to take them to new heights in 2020.

Joywave appeared in a feature on Indie Music