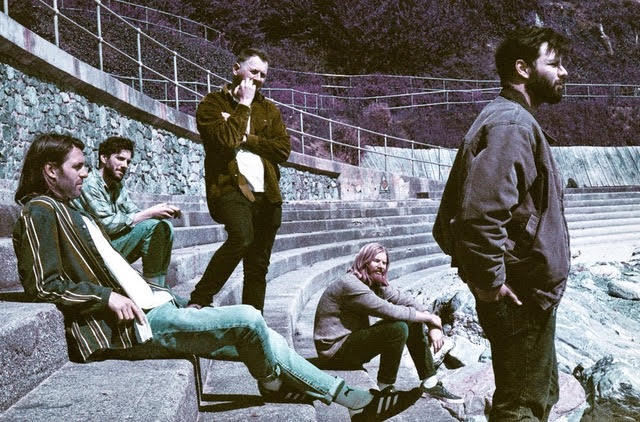 As needle-fine guitars duel through hives of retro-electronics, ‘Align’ sees the Torquay five-piece announce their return with a darkly exhilarating rush of shoegaze-washed atmospherics and breathtaking pace.

Ruminating on the concept of interpersonal manipulation and control, ‘Align’ arrives as something of a statement of intent from a band looking to cast off the shackles and take back control of their destiny.

With the momentum of a string of successful single releases to their name – including ‘Cut and Run’ which landed in the Spotify Global Viral 50 chart with over 500,000 plays, plus the support of top online tastemakers (DIY, CLASH, The 405), and the thrill of playing to a packed-out tent at Glastonbury Festival on the BBC Introducing stage, in 2017 – Tourists had what many bands would kill for. But perfectionists to the core, as the encroaching label and touring pressures began to hem them in with expectations, Tourists instead pulled a maverick move. Spurred on by a want to make the album they had always truly envisioned for Tourists’ debut, the band made a conscious decision to simply step away from it all, to cut communications and take back control; no matter how long it may take.

Re-emerging in 2019, ‘Align’ is the first joyous indication of exactly what they’ve been up to and a sure-fire confirmation of their decision.

Speaking about why ‘Align’ was the right track to re-introduce the world to Tourists, Tom Wilkinson of the band says:

“[Align] follows the idea of somebody mastering their own inner spirit to command others. We feel this track really reflects our main musical influences – the deep-rooted post-punk element coupled with 80s synth/dark-pop. As we played it more it took on a life of its own, getting heavier with more dynamics, and a dramatic, driving ending.”

If ’Align’ recalls the dreamy, reverb-laced, widescreen soundscapes that hallmark some of US’s finest indie exports, it may come as little surprise that the band enlisted Daniel Schlett at the infamous Strange Weather Studios in Brooklyn to place his inimitable production signature on their latest work.

Having searched high and low these last few years for a producer who could see eye-to-eye on the vision for their new material, it was eventually a chance encounter with Schlett in Brooklyn on the Williamsburg Bridge that would bring the two together. With an impressive studio knowhow, an experimental creative approach, not to mention his notable work with the likes of The War On Drugs and DIIV (of whom he had been instrumental in defining their ‘mid-fi’ sound); it soon became crystal clear from this brief encounter Schlett was the man for the job. The fact he had witnessed Tourists’ landmark Glastonbury set in 2017 was the clincher.

Returning on re-energized form and promising even more from these fruitful sessions of the last two years, ‘Align’ is only the tip of the iceberg.