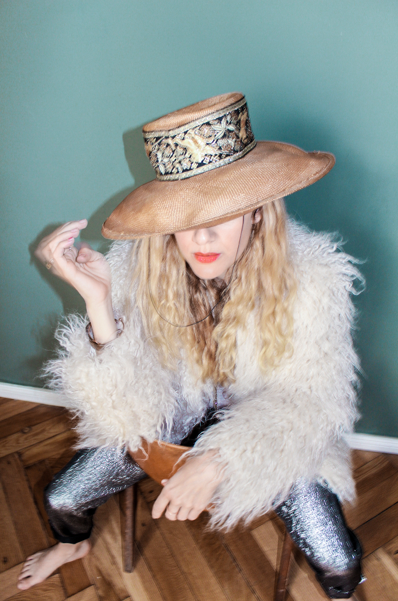 Following the release of their latest single  THE GHOST OF HELAGS, have unveiled a sepia-tinged new video for: ‘The Santa Rosa Song’.

Independently directed and filmed by the dream-pop duo in their newfound home of Berlin, the DIY video follows Teresa as she journeys through the city’s historic Eastside.

Speaking about the new video John Alexander Ericson of the band says:
“The video for ‘The Santa Rosa Song’ was shot just a couple of days ago walking down Frankfurter Allee in what used to be East Berlin, hence the Soviet Union-esque architecture. The video ends up in front of the twin towers at Frankfurter Tor.”

Filmed in a Super-8 video style, the new video offers a nostalgic and reflective accompaniment to the Scandinavian duo’s serene new single.

With echoes of Beach House to Brian Eno, ‘The Santa Rosa Song’ is a soul-stirring brew of powder-snow harmonies, pattering minimalist percussion and wide-eyed orchestration.

Inspired by the place of its titling, the track was penned on a road trip in Northern California a few years ago as the duo snaked along the coastline road from Santa Rosa and through to the breathtaking Redwood National Park. Written and recorded in moment of divine inspiration, the track was then forgotten about over the course of the trip and lost in the labyrinthine recesses of a hard drive they carried with them.

Some years later at their current Berlin base in the icy throes of mid-winter, the duo warmed themselves with the memories of the demos recorded on that trip. Stumbling upon ‘The Santa Rosa Song’ once more, the track stood out amongst them, a glowing reminder of those hazy Californian days with a glistening potential for something more.

Inviting close friends into the process, the duo set about furnishing the song into the soulful, euphoric and cathartic piece we hear today. As Teresa reflects:

“We started working on it again and got some friends in to help us sing the vocals, because we wanted it to sound like it is sung by a collective, rather than a solo performance.  We also got Natasha Jaffe in to play some beautiful Cello all over the track.”

The Ghost of Helags are singer-songwriter and producer duo Teresa Woischiski and John Alexander Ericson. Hailing from Sweden and now located to Berlin, the pairing combine the ethereal dreampop sounds of their Scandinavian roots with the electronic nuances inspired by their newfound home. Following on from New Music Friday playlisted debut single ‘I Carry Your Heart’ and the heavenly follow-up ‘Autobahn Lullaby’ (a tribute to their Berlin home), ‘The Santa Rosa Song’ offers fans another spine-tingling delight to savour.

Artistic, enigmatic and entrancing on the live stage, The Ghost Of Helags’ innovative use dance and body language to communicate with their audiences has already seen them become something of a word-of-mouth sensation on the Berlin scene and beyond. With fervour around their shows seeing them sell-out esteemed spaces such as the Berghain Kantine earlier this year, the band are now hatching plans for further dates across Europe and in the UK this Autumn.

The Ghost Of Helags appeared in a feature on Sound Juicer
Follow The Ghost of Helags on: