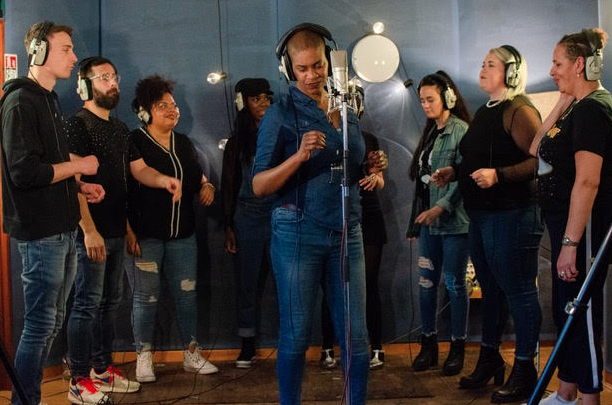 Sense of Sound Singers is an award winning collective of phenomenal vocalists, renowned for delighting and thrilling audiences locally, nationally and internationally. Their incredible talent has been recognised across the UK and beyond, leading them to become the resident singers for ​Cream Classical and perform backing vocals for many big names. According to the choir’s ​creative dynamo, ​Jennifer John​, the new single is packed with ​“Feel-good Disco vibes” which is exactly ​“what Sense of Sound love to do”. O​ver the past 12 months they have continued to grow and expand on all fronts.

After establishing club nights in Liverpool, ​Duo-Tone then went on to strengthen the brand with an eclectic mix of consecutive House, Electronic and Nu-Disco releases. Recent singles came from the likes of ​KOVA (which hit the ​Upfront Club Charts Top 10​) and ​Josh Hunter (which has received extensive support from ​Radio 1 and ​KISS FM​). They have now expanded beyond their label/event format to present their own tracks, collaborating with the best new talent, under the name of ​Duo-Tone Productions​.

Sense of Sound Singers previously collaborated with ​Duo-Tone Productions to reinvent the ​Aly-Us classic ​‘Follow Me’​. The track was later remixed by Swedish beat-master ​OPOLOPO​, landing a ​Top 10 position in the ​UK Music Week Club Charts ​and earning a place on the ​‘Take Me To Church’ compilation from Midnight Riot Records​. This time however, they have been allowed to fully express their creativity and help concoct this fully original track flavoured with Disco rhythms.

‘Time and Time Again’ utilises the dynamic skill sets of both ​Duo-Tone Productions and ​Sense of Sound Singers​, pairing their complementary sounds to create a unique Dance blend. The deep, suspending intro dives into a captivating beat that acts as a platform for the choir to show their quality. The upbeat vibes and heartfelt lyrics tap into the philosophies of the vocal collective and show their tremendous power once again. After the success of their previous collaboration, this track looks set to sail even higher with this sensational new release. ​
Of the new track, Jennifer John, Manager & Creative Director of the Sense of Sound Singers says:

“We are forever evolving and love all different styles of music and performance experiences. We’ve worked alongside so many different types of artists/events from Niles Rodgers and Chic through to Cream Classical and Paloma Faith so we love a touch of the theatrical, flamboyance and fun. Most importantly we definitely love to party!”