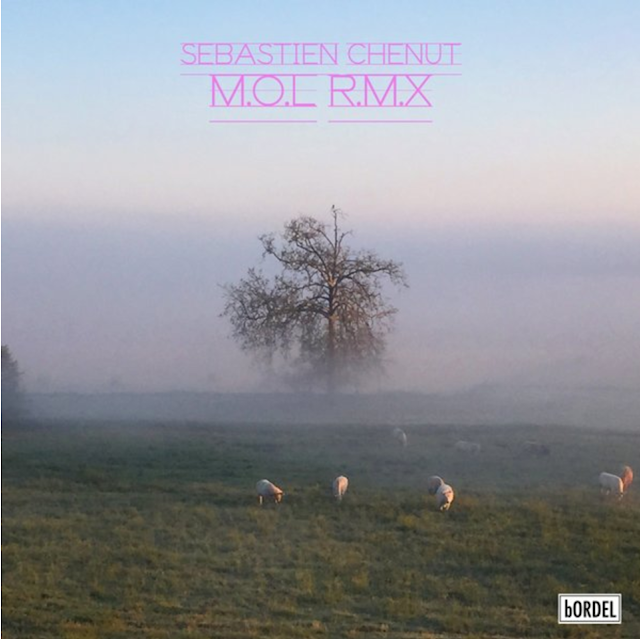 L.A based, Sebastien Chenut is half of French electronic duo Scratch Massive and has been making music for 15 years plus. As both a vocalist and a beat maker he produces gorgeous synth pop and electro that is effortlessly breezy. Here he gets a little darker and more experimental with a moody cut of fizzing electronics.

C.A.R. is Chloé Raunet, a half-French, Canadian born, London based artist who was signed to Kill The DJ, co-hosts a show on NTS and makes music on the weirder-end of electronic spectrum that mixes up pop, synth, post punk and kraut into her own beguiling forms. She was also the vocalist for the band Battant. First up is her live take version of ‘Motor Of Love’ and it’s a slowly unfolding track with shadowy drones and curious synth chords all building to a crescendo. Swirling pads add scale and foreboding vocals bring a sense of menace to this eerie arrangement.

Next comes a remix from Sutja Gutierrez, a Spaniard who is an artist, musician, member of the band The Fruhstucks as well as a host of the radio show Rational Anthem at dublab.es. His scintillating version is a blizzard of electronic and guitar riffs, whirring machine sounds and stormy atmospheres all underpinned by jumbled drums. It is one to get your whole body on edge and is a potent and powerful brew.
The excellent original version of ‘Motor of Love’ is a freeform synth jam with lines that gurgle and bubble about, changing shape and pattern before your very ears. The soft rubber drums progressively sweep you up and a distant mix of watery sounds, whispery vocals and dark acid slowly come to the fore so things end up in a very different place from where they start.

We chatted to him about the release, his inspirations and his songwriting process

Hi there, how are you and what are you up to today?
I’m very good thanks, it’s very sunny as usual in LA and I’m going to the studio

To those not familiar with you, how would you describe your sound?
Dark Electronic Techno Music

Which other artists are you into at the moment and why?
Poor Grrrl, Maxwell Sterling, Johnny Jewel, Big Thief, Maud Geffray, Mark Pritchard, Turbotito, Sutja Gutierrez..
Those guys seems bringing me a right definition of modern music..

Are there any key pieces of equipment that you are using to define your sound?
We used for a long time with Scratch Massive plug ins etc..selling all our vintage equipment. But since 5 years we are back with full analog environment and inside this family back in the studio, the Sequential Circuit Pro One and Roland JP6 are the ones made our sound the sound we want, period!

What would you say some of the challenges artists face today in the music industry?
Too many artists!

Where do you gather songwriting inspiration?
I moved from Paris to LA and it changed a lot of things in music and the one we do with Maud Geffray for Scratch Massive. My inspiration comes now from the big space, the large infinity, the mountains surrounding on of the largest city of the world, you can see far, high and this do change our perception of making music, giving more time and space in it..

Take us through your songwriting process. Are there any particular steps you take when putting your music together?
Not really, it comes how it comes, I make the sequencers rolling together and try to find a melody or mood from them to start to build something with it..But there is no special order to get to this point.

What’s the best gig you have ever done and why?
I think it is the Gay Pride stage for the finale at Place de La Republique in Paris in 2015 after all the terrorism attacks, the place was full of 20000 people and it was incredibly touching to see all of them were strong and full of dignity with no fear, just pure joy!

And the worst?
Kyoto in Japan, small club, too much fog from humidity, all the people drunked as they could t stand on their feet, man walking on a girl in the toilet, the girl so drunk couldn t say a word, dancefloor with no vision, bad ambience,  I like trash but that was beyond trash, it was boring apocalyptic …

If you weren’t a musician what would you be?
Movie director or wine maker

Where do you see the future of recorded music heading? Into more and more collaborative artistic spaces, mixing sounds and visuals, etc? In your eyes, what does the music industry NEED most of all?
I mean we are already much in further place that I could excepted 10 years ago. Technology is going so fast that you have crazy gears for everyone, the music communications between old synth and modern environment is not anymore a trouble, we have every possible we could need with us. So to be honest I don t what else we could get too anymore. It is also like for everything else so much new stuff coming it is hard to keep following.. saying that, today everybody can record and have a super studio for nothing and have a huge sound.
Then it opens a lot of new windows for artists, we can mix video and music, we can color grade ourselves, mixing music, we are so much surrounded by technology that things became more easier, we can now produce a record from A to Z, including in house music videos, artwork, design etc…
I see a lot of music producers recently directing their own videos, I think Its great because you can really developing your art with all the angles possible you wanted to reach.

Do you have any information regarding upcoming releases, projects or gigs in the pipeline that you would like to tell us about?
We will release in the next 6 months on our label bORDEL a new ep of Turbotito called ” Different” with remixes of Kasper Bjorke & Gemini Brothers, our first compilation called “moRtel” with only LA based artists, new single of Scratch Massive, Turbotito first solo album and more to come….

Finally, how are you feeling about 2017? How do you think musicians have been affected by the uncertainty and upheaval the world is experiencing right now?
We are living in a strange mode of life, its been very hard in Europe, and in particular my own country France. Its not easy, it does put tension between people.
I’m living n LA, the mood is very chill and its very a big contrast when I go back to Europe now and I understand totally, I have been there when severals attacks happened..
Music always been a refuge for escaping and protesting in the same time, it what we do and we always do!